The Cost of Outside Developers vs. In-House Employees 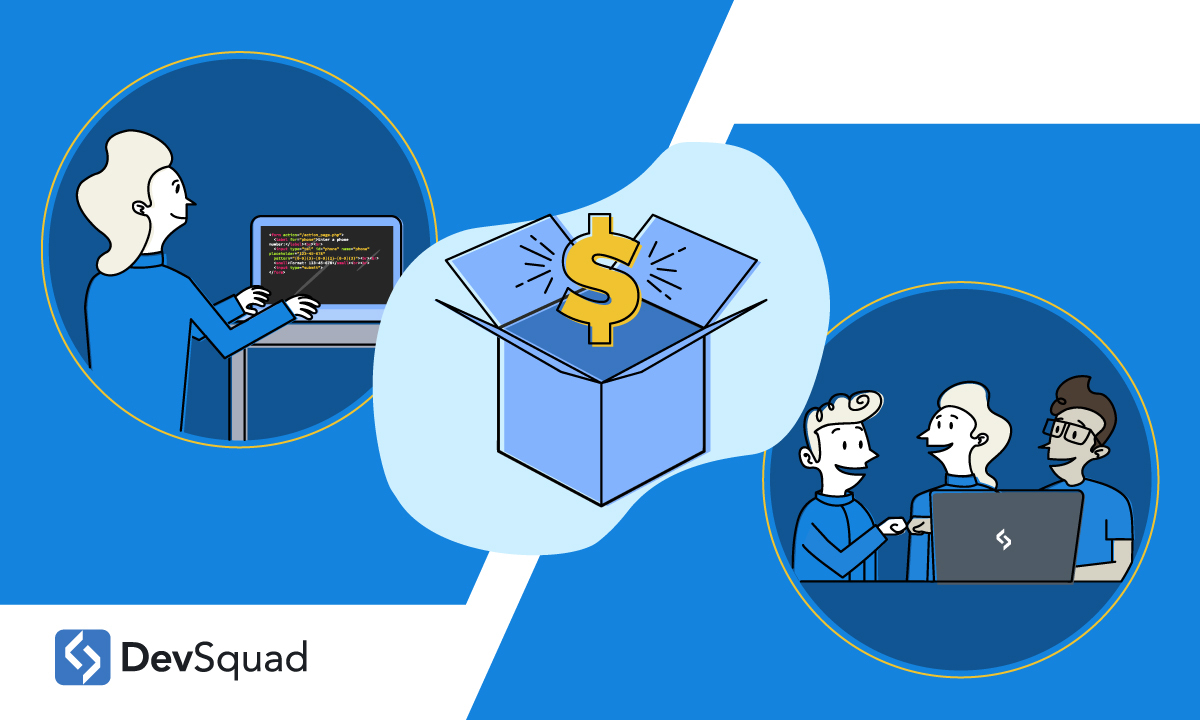 Labor cost is always a concern whenever you expand your team. It’s often your biggest expense - up to 70% of your total cost structure. This means you have to think critically when you purchase labor. A poor decision could stress your budget or disrupt your profitability.

When it comes to hiring developers for your project, you have two options: Build an internal team or hire outside developers.

In other posts, we’ve covered the common challenges of hiring outside development (and how to solve them) and how outside development can make a better product. In this post, we’d like to compare the cost differences of hiring an outside shop versus building an internal team. Our goal is to help you make the best hiring decision for your next project.

The Cost of Hiring In-House Developers

The median salary for a software developer in the United States is $103,620. The top 25% earn about $130,460. The lowest 25% make $79,340. There’s a bit of variation depending on location, of course. San Francisco developers make more than Omaha developers, but you get the idea.

But those aren’t the end of your expenses. The real cost of hiring an in-house employee comes with additional costs.

The Cost of Recruiting

Just finding the right person can be expensive. You have to advertise the position and possibly pay a recruiter. You may have to pay for background checks, drug screens, and assessment tests. There’s also the time cost of everyone involved in the hiring process - managers, HR specialists, assistants, etc. If you do a lot of hiring, you also have recruitment management software tools to pay for.

According to the Society for Human Resource Management, the average cost to hire an employee is $4,129. It takes 42 days to fill a position.

The Cost of Training

Once the new hire is in place, you also have to train them. They will need to be paid for unproductive time just to learn how to be productive. You also have to eat the costs of anyone else’s time who runs the training, like their direct supervisor.

According to the Association for Talent Development’s 2016 State of the Industry Report, the average training cost an employee is $1,252. Depending on their tasks, training can be as expensive as $14,000.

The Cost of Workplace Integration

Workplace integration is an often overlooked cost because it’s hard to see. This cost includes the tools the employee needs to be productive, like a desk, chair, computer, cell phone, and software. Even the space where they sit to work comes with a cost.

Sadly, the COVID-19 pandemic has increased these costs. Workers must sit farther apart, wear personal protective equipment, work alternating shifts, etc. Some of these costs will stick around for a long time.

Other than salary, non-salary benefits is the biggest category of hiring costs. Skilled developers are professionals who expect comprehensive packages. If you don’t offer these benefits, you’ll struggle to hire and retain quality talent.

As you can see, hiring an in-house employee requires considerable investment. You’ll make that money back as they produce for your company, of course, but how long does that take?

It's different for every company, but developers don't achieve full productivity for about six months. Depending on the nature of their work, it could take up to a year for the company to recoup their initial hiring investment.

And in the worst cases, employees that leave soon after being hired force you to incur many of these costs all over again. Imagine paying $5,000 or $6,000 to train an employee, just for them to leave shortly after training. The potential expenses can be crippling.

The Cost of Hiring Outside Developers

As you can see, the cost of hiring in-house is substantially more than just their salary. Those extra costs can’t be ignored and they add up quickly. This is why cost is the top reason organizations choose to outsource.

How much do outside developers cost? To be fair, you still deal with the same salary and benefit costs when you hire an outside team. People need to be paid for their labor. The development firm simply passes those costs on to you.

But there are several important caveats that make hiring an outside team cheaper than recruiting your own employees.

1. You Don’t Pay Outside Developers Forever

Your outside team isn’t a permanent hire. They only stick around long enough to complete your project. If you only need them for six months, you only pay them for six months. Even if your expenses were exactly the same of hiring an in-house team, you would save money during all of the periods when you don’t need them.

When you hire in-house, however, you’re stuck with that cost forever unless you’re willing to terminate people. That kind of management can make it harder to hire in the future, especially if you fire people after promising indefinite employment.

Hiring outside developers is especially smart when you’re building the first version of a product. Since you aren’t sure if the market will accept it, you’ll want to reduce labor commitments as much as possible.

2. You Can Adjust the Team Based on Your Needs

Let’s say you hire a few in-house employees to build a product. Later, you decide to release a feature that requires a skill your employees don’t have. You could either a) hire a new developer, or b) train your existing team on the new skill. Both options are expensive.

Outside development eliminates these extra costs by giving you control over the makeup of your team. You can swap developers based on the needs of your project. Done with the infrastructure? Swap him out for a UX designer without incurring more costs.

3. No Recruitment, Training, or Integration Costs

Like we mentioned before, recruitment, training, and integration are costs you can't avoid when you hire an in-house employee. When you hire the services of an outside development shop, however, you don't have to pay these costs. The team is already onboard and ready to work.

4. You Can Take Advantage of Labor Arbitrage

Labor arbitrage is typically the biggest factor that makes hiring an outside shop substantially cheaper than building an in-house team. You can save a lot by hiring skilled professionals in different markets where labor is cheaper.

That said, simply hiring an offshore development shop can open you up to additional expenses you would never expect. A language barrier, for instance, could create conflicts that cost time and money.

At DevSquad, we avoid these kinds of problems for our clients by nearshoring. You work with us, a development shop right here in the United States, but our developers work remotely from cheaper markets. This means you get the cost savings of hiring inexpensive developers without any of the traditional offshoring drawbacks.

5. You Can Cut Underperformers Quickly

If an employee isn’t working out, and you’ve tried everything you can to resolve the issue, sometimes you don’t have any choice except to let them go. But firing an employee is a whole process. You need documented cause and several meetings with legal and HR to make sure you aren’t opening yourself to liability. It actually costs money to get rid of an underperforming employee.

You don’t assume these costs when you hire an outside development shop. You can either tell the shop to replace the developer with someone else who meets your needs or hire a different development shop. Both options are quick and free.

Which is Right for You?

If cost is an important concern, it’s clear that you’ll want to hire an outside development team. We’ll be honest: It’s not the right solution in every circumstance, but it definitely has money-saving advantages.