7 Famous SaaS MVPs and How They Launched 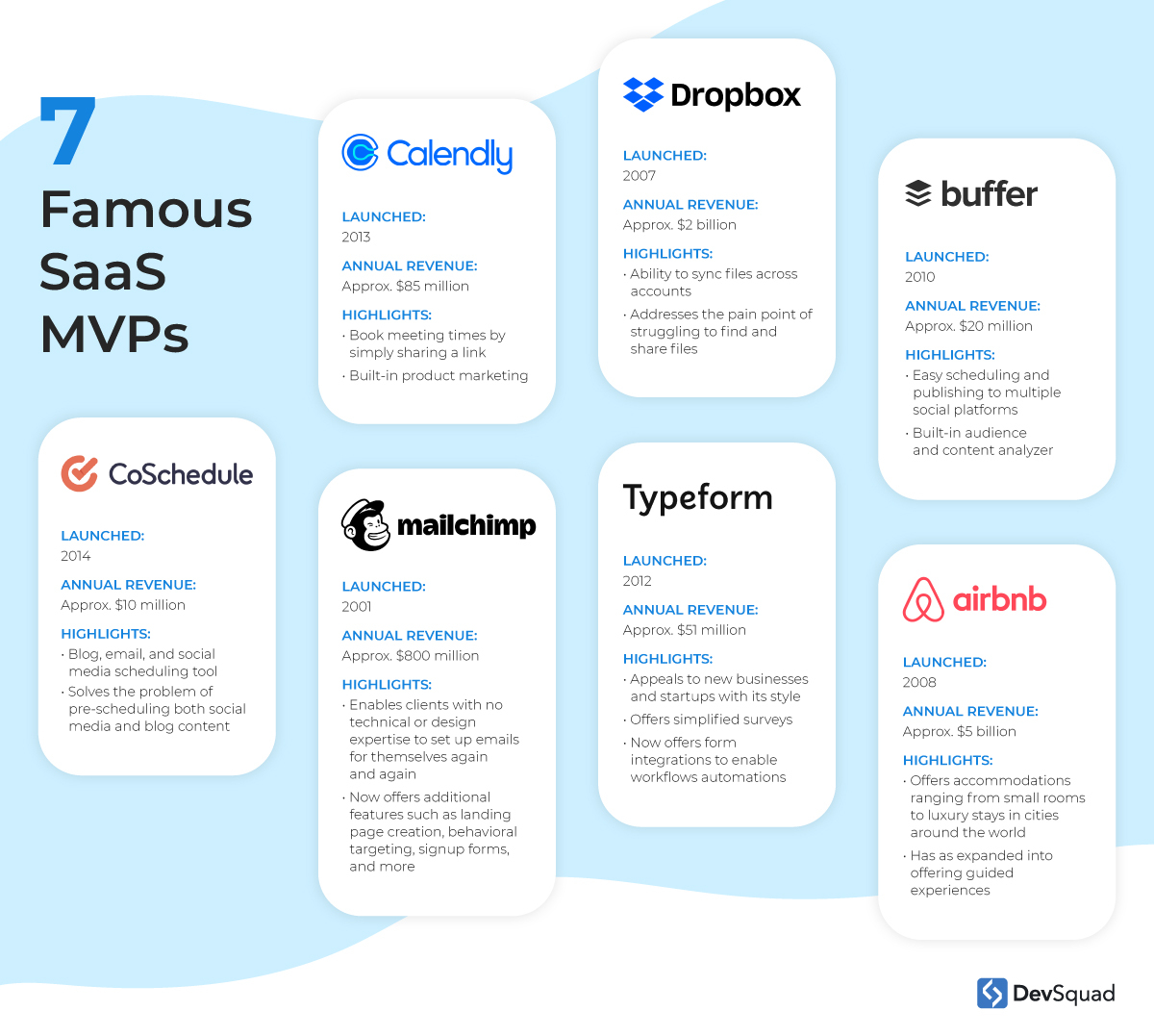 Every good idea has to start somewhere. The simpler and smaller the starting point, the better. When you launch a SaaS MVP quickly, you have the opportunity to not only collect feedback from users faster but to drive revenue too.

Even the world’s top SaaS and tech companies had very humble beginnings. And considering how terrible the internet looked 20 years ago, many of them had…unattractive beginnings.

But the point of this article isn’t to make your eyes bleed.

Instead, we want to take a look back at what top companies’ MVPs looked like in order to understand why they worked, and how these MVPs launched the companies into the successes that they are today.

Here are 7 of our favorite SaaS companies and their MVPs.

Share this infographic on your site, just copy the HTML code below and be sure to credit us: 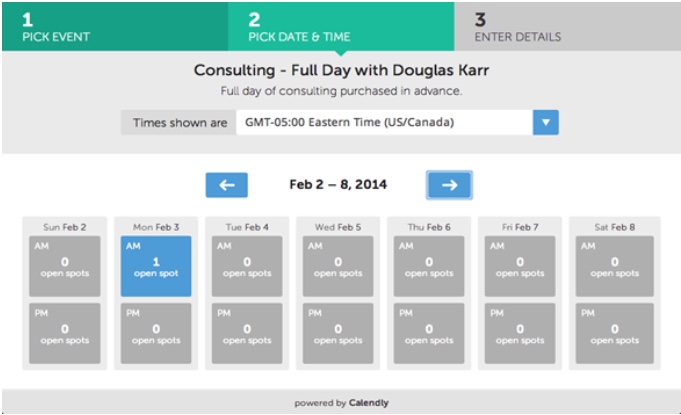 Source: Calendly: How To Embed A Scheduling Popup or Embedded Calendar In Your Website or WordPress Site

Calendly launched with a simple scheduler so that people could book times with one another just by sharing their booking link. The product’s UX was not as simple or attractive as it is today, but it did the basics and allowed people to book a time with one another.

Calendly founder Tope Awotona came up with the idea for Calendly in 2012 when trying to schedule a call with someone, only for this to result in tons of back-and-forth emails. When he tried to Google a schedule tool, he found that they were all slow and old school. Tope decided to “put everything on the line” and put all of his time and money into building the MVP because he knew it was a massive opportunity.

A big part of why Calendly grew so quickly was because it had product marketing built in. Anytime someone sends their Calendly link, the person scheduling is introduced to the platform. 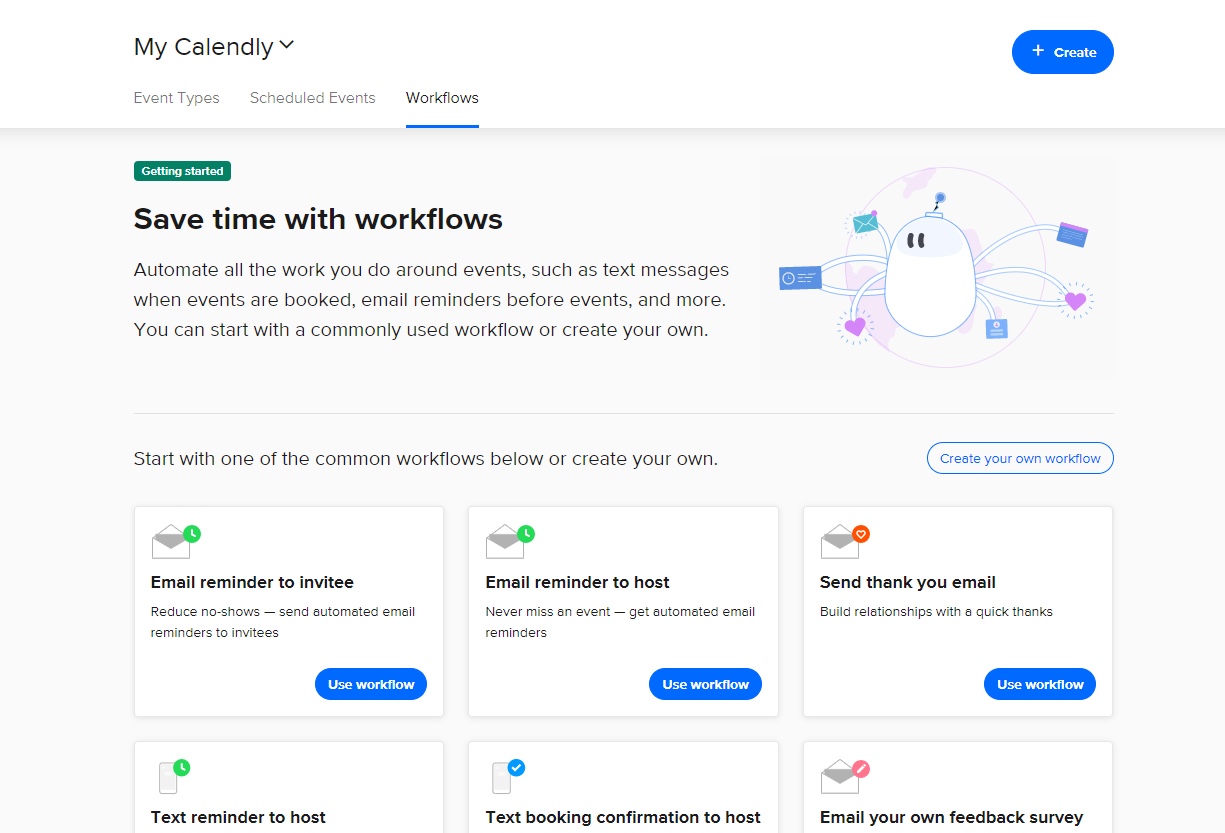 Today, Calendly offers the same simple and easy scheduling. But the company also offers multiple event types, the ability to charge for appointments, and workflow automation for business owners and professionals.

Launched in 2007, Dropbox pulls in nearly $2 billion in annual revenue every year. 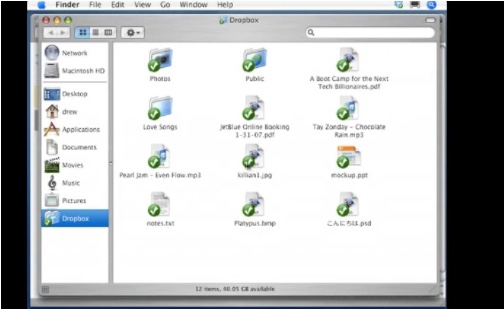 Source: How DropBox Started As A Minimal Viable Product | TechCrunch

The founders wanted to avoid the risk of making something no one wants, so they launched a simple MVP which was basically like an online folder. You could upload and download files, sort them, and name them, and they would synch across all accounts for anyone who had access to those folders.

Dropbox had tens of thousands of people on their beta waiting list before they even launched. Their success all leads back to a 2008 demo video that went somewhat viral, driving tons of traffic to their website. The founder shared the video with various online technical communities, and things took off from there.

The video addresses the very real pain point of constantly struggling to find and share files, and (instead of cheesy animated cartoon characters), it shows people exactly how the product works. 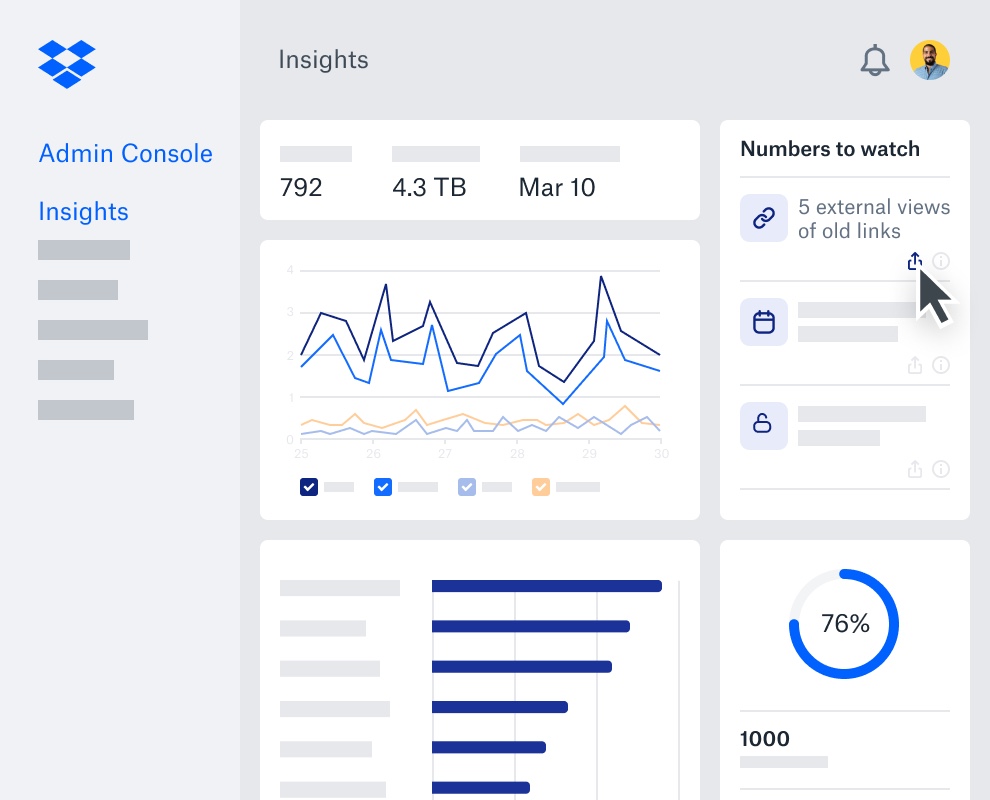 Founded in 2010, Buffer brings in $20 million in annual revenue. 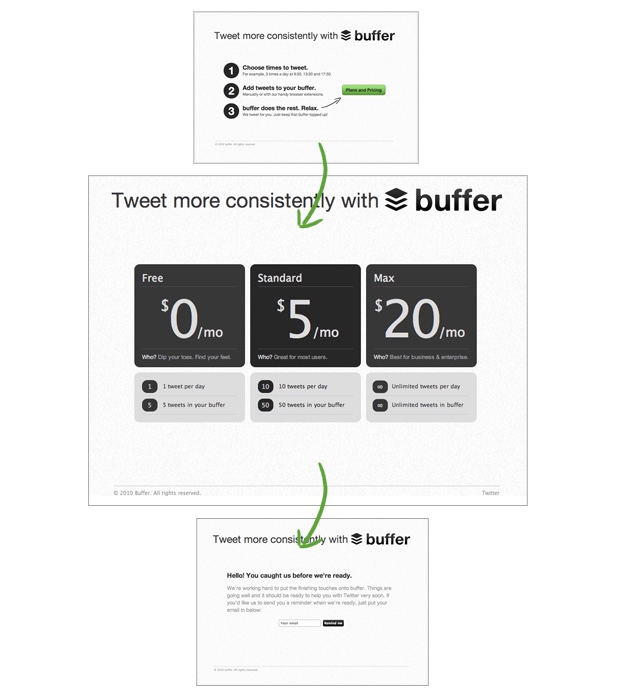 Source: Idea to Paying Customers in 7 Weeks: How We Did It

One of the most well-known MVP stories, Buffer’s founder launched a smoke testing landing page to see if anyone actually wanted their product idea.

This landing page showed a pricing page and encouraged people to sign up for the waitlist.

After viral success with organic Twitter, the founder realized he had something great and went for it.

Buffer launched with a simple idea: pre-scheduling your tweets so you could batch create them, set it and forget it. There was no analytics, no Facebook scheduling, no social listening…just tweets. Once the concept was validated, the team built it in just 7 weeks.

This simple idea was exactly what Twitter-lovers were needing. By gaining initial success with his own audience, the founder was able to expand Buffer into one of the best social media schedulers today. 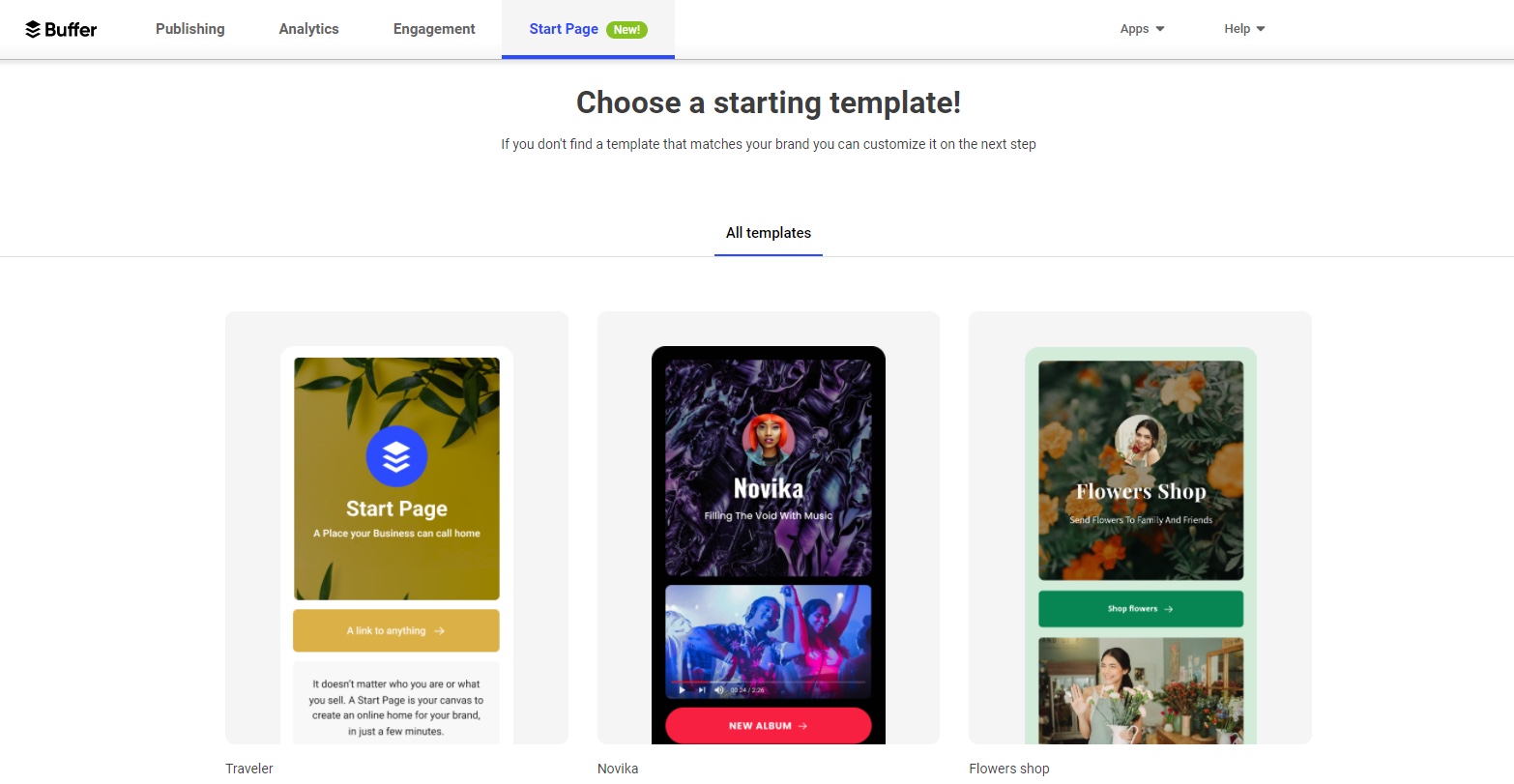 Unlike more complex programs like HootSuite, SproutSocial, and MavSocial, Buffer still likes to keep things simple to this day. But that doesn’t mean they haven’t expanded. You can now publish to Instagram, TikTok, Pinterest, Facebook, and LinkedIn. You can also analyze your audience and social media content and respond to audience comments from one central platform.

Buffer also just launched a new feature called “Start Page,” which is a landing page that people can put in their social media profiles in order to offer multiple links in one place, or change their main link at any time.

Founded in 2014, CoSchedule has an estimated annual revenue of over $10 million. 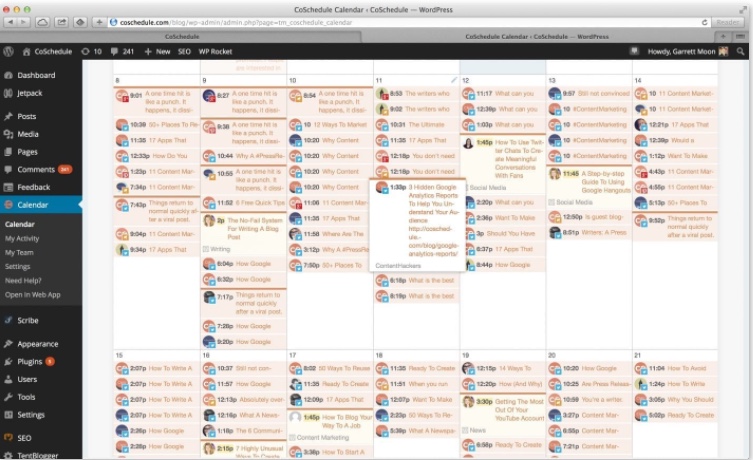 CoSchedule is a blog, email, and social media scheduling tool. CoSchedule actually began as a blog and a content marketing agency. Before even building the product, founder Garrett Moon was scheduling things for customers and making it seem like it was the product doing it. (This way he could test if people wanted a blog scheduler before building one.)

When he did build it, it was a basic WordPress plugin that only did blog scheduling, social media scheduling, and editorial calendars.

This MVP worked because it solved a problem: pre-scheduling not just social media content, but blog content too. The company was able to build an initial audience of bloggers and content creators, but then expanded to work with in-house content marketing teams at larger companies.

Founded over 20 years ago in 2001, Mailchimp now brings in $800 million in annual revenue. 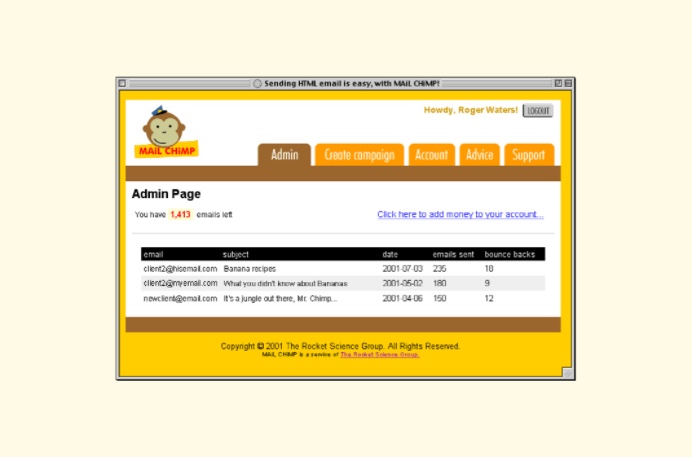 Source: How the first version of Mailchimp was designed

Mailchimp’s well-known monkey logo wasn’t always winking, but he did always have a sideways smile. CEO and co-founder Ben Chestnut created not only the MVP of the product but also the MVP of the logo. Previously, Mailchimp was a web design agency.

“After 7 years or so of working on different consulting projects, we started to notice similar challenges across all of our web design projects. So we started to build a system to automate each project. Mailchimp was different from our other projects because it was self-serve. Before we had to pitch and sell to clients. But Mailchimp enabled us to generate new account sign-ups as we slept. People could go in and use the service themselves. It was the one project that scaled.” — Ben Chestnut

Initially, Mailchimp offered simple email marketing features to allow businesses to reach their audience at scale, and without the Mailchimp team having to set up these emails themselves like their old agency model.

The Mailchimp team honed in on a manual problem: creating and designing emails for clients and setting them up to be sent out to their email list. Their clients had the same needs, over and over again. So the team created a solution that would enable clients with no technical or design expertise to set up emails for themselves.

The team had a validated problem, and an existing audience of current, former, and prospective clients to sell the product to.

Source: Typeform Beautifies the Boring Survey for Employees or Clients

While Typeform’s MVP wasn’t as simple and clean as it is today, the UX was still much nicer than the complex survey tools it set out to replace. As one reviewer said of Typeform in its early days, “Many of us have used SurveyMonkey, Google Forms, and/or Wufoo to create a survey for employees, co-workers, or clients. While these platforms are easy to use, they just look … blah and sooo 2000s.”

Typeform is one of those companies that disrupted a SaaS field that had already disrupted paperwork. Sort of like how ClickUp and Notion disrupted the project management industry and succeeded even where others thought there was no market share left to be had, Typeform came in and snagged customers away from existing survey tools and appealed to new businesses and startups with its style.

This just goes to show you that in just about any field, clean and simple UX can be enough of a differentiator.

Typeform still offers simplified surveys for customer research, intake forms, and other use cases. But they also now offer form integrations so that users can automate various workflows. For example, you can notify a channel in Slack whenever a form is filled out. Or you can automatically send new contact from Typeform into Mailchimp.

Founded in 2008, AirBnb pulls in $5 billion in annual revenue. 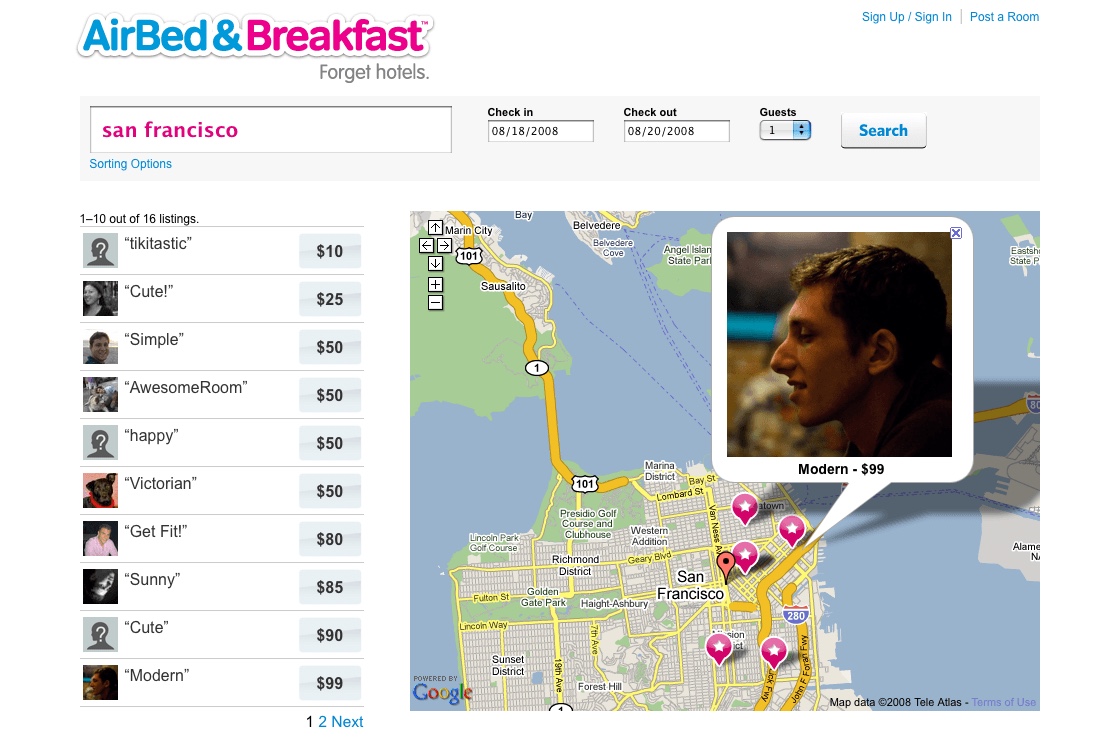 The AirBnb story is an interesting one. San Francisco designers Joe Gebbia and Brian Chesky and software engineer Nathan Blecharczyk pulled together $20,000 in seed funding from friends and family to build the basic website of room and bed listings. The initial concept was to appeal to younger travelers who wanted to save money compared to staying in a hotel.

After some initial traction with getting people in their network to list their spare rooms, the founders realized that things weren’t getting booked because the photos were of poor quality. So they infamously went around to listings in San Francisco and took their own pictures to upload to the site.

AirBnb’s founders tapped into a real need: easy couchsurfing anywhere you wanted to go. Young people were already looking for affordable and out-of-the-box accommodations. AirBnb simply made it easier for them. And it provided an extra stream of revenue for the people renting out their space.

They launched the simplest version of the website that they could and got it out to their personal networks first. The rest is history.

Today, AirBnb still offers affordable, small rooms in cities around the world. But there are also luxury accommodations now too. And the company has expanded into offering guided experiences. Now, anyone can easily become a tour guide and offer unique experiences through AirBnb. 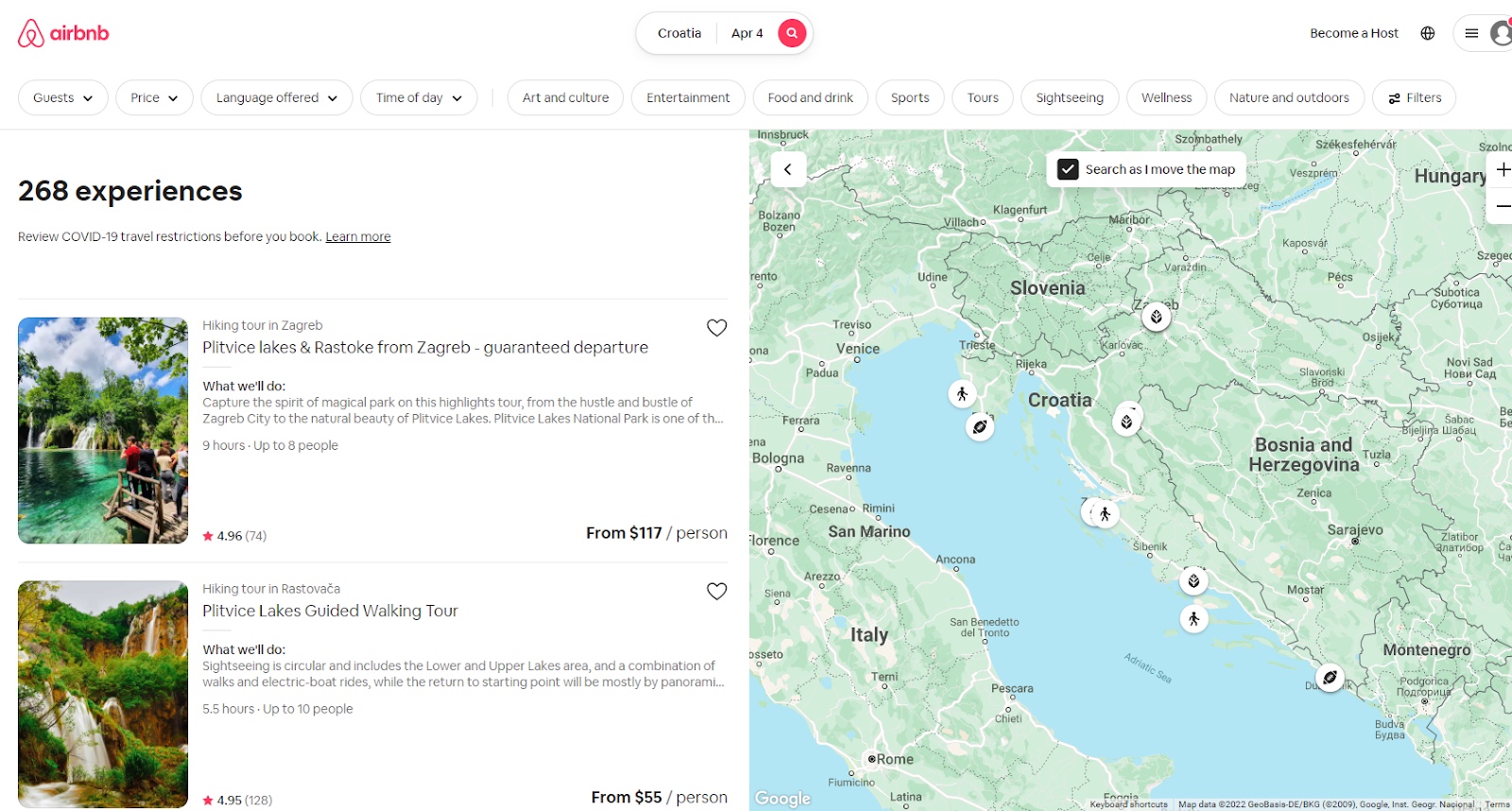 No matter what the product, an MVP will flop if there isn’t a market need. So always start with market research, and make sure to build the smallest MVP possible in order to vet demand.

DevSquad is an expert at launching SaaS MVPs quickly. Learn more about our MVP development services.