Why We Created a Developer-Centric Company Culture 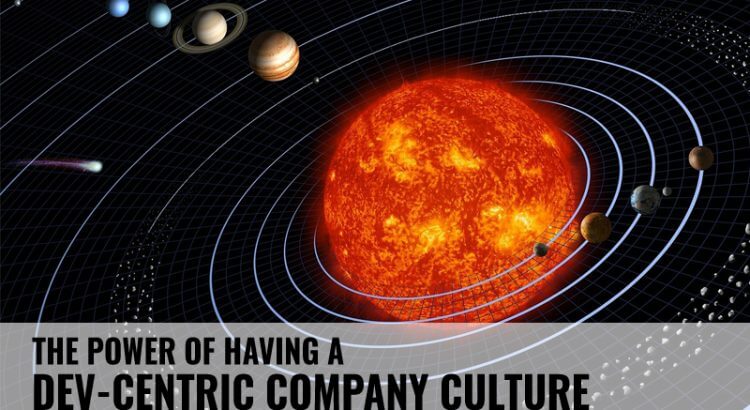 Dev-centric isn’t just a buzz word, it’s a practice… And it works! Find out what a developer-centric company culture is, how it can reenergize your team, improve your business, and how you can create one of your own.

Starting from the top, here's why DevSquad chose a developer-centric company culture...

At some point, we’ve all thought that we were the center of the universe. And, despite the initial shock of learning that notion to be unmistakably false, most of us have freely let it go. For great software developers, though, that preoperational egocentric identity might have actually been right…

Just like the sun is the center of our solar system and all things within it are moved by that massive, awesome force, so too is the present and future success of business governed by software developers.

The viability of any given software product starts with, and is almost entirely contingent upon, its developers. If you offer SaaS (software as a service) or if your business relies on using software (like a CRM), your success is immediately dependent on that software and upon the developers who created it.

If your product doesn’t perform with a smooth and intuitive flow, it will feel clunky or cumbersome and, realistically, there ain’t nobody who got time for that. Your users will get annoyed and they’ll blame your software for all of their earthly frustrations.

Why is that worse?

You see, keeping your developers happy is inextricably connected to the performance of your product and to the happiness of your customers.

Your developers are not only responsible for the functionality of your product, but also for the consumer perception of your product. That’s a really big deal.

In other words, your developers are the sun, the thing that we all rely on, and keeping them bright and shiny keeps your business alive and thriving.

This is why DevSquad takes a developer-centric approach to the way we work and the way we deliver amazing software. We put our developers first and in a miracle of reciprocity, they put our clients’ products first. This means we have happy people who write pristine software, and clients who are wholly satisfied with the products we build for them.

Why is this approach important for everyone who works with developers?

Because good developers (especially good senior developers) are really hard to find! And they’re really hard to keep. If you want to wield the power of a master software developer, you have to offer him an environment that he loves working in.

Keep in mind, that a company culture will arise no matter what you do to shape it. Accordingly, it’s in your best interest to be intentional about the personalities you hire and the company culture that evolves from your team. If you’re actively involved in the social, competitive, and performative aspects of your team, you can direct a company culture towards supporting effective development, and build an atmosphere in which all of your team members are excited to participate.

Because more satisfied developers build more satisfying software, and that improves your whole business foundation. From developers, development, sales, sales-people, marketing, marketers, deliverables, consumers, and so forth into infinity, the quality of your developers affects every faction of your business.

But treating your dev team awesomely doesn’t necessarily mean bankrupting your company with payroll or sending them on exorbitant Tahitian vacations for a job well done. It simply means, give them the tools, the resources, and the reasons to be happy at work.

Lucky for you, most developers pursue a job in software because they love solving problems. Monetary compensation is important, but there are a lot of things great developers want more than money. In a nutshell, doing work that makes a difference fulfills most developers. Writing good software is equivalent to inventing solutions and THAT is why developers do what they do.

When you create an environment that supports, motivates, and rewards developers, the result will be better code. You'll get better software, happier customers, and a stronger business.

Here’s a quick list of things that will keep your developers effective and satisfied on the job:

*Follow this link for more information on how to keep your developers happy at work.

You see, it not all about the “Benjamins.” Instead, it’s about creating a fulfilling environment for your team. If you take care to create a positive and efficient workspace for your developers, your team will feel happy and they’ll do better work.

In a developer-centric company culture, you’ll get superior code, and you’re more likely to gain and keep incredible developers. Ultimately, that’s something every business should strive for. And it works!

If you have stories about a company culture that has motivated (or mortified) you, tell us! If you have ideas about how to create the ultimate dev-centric atmosphere, tell us that too!

Please share your thoughts in the comments section below.